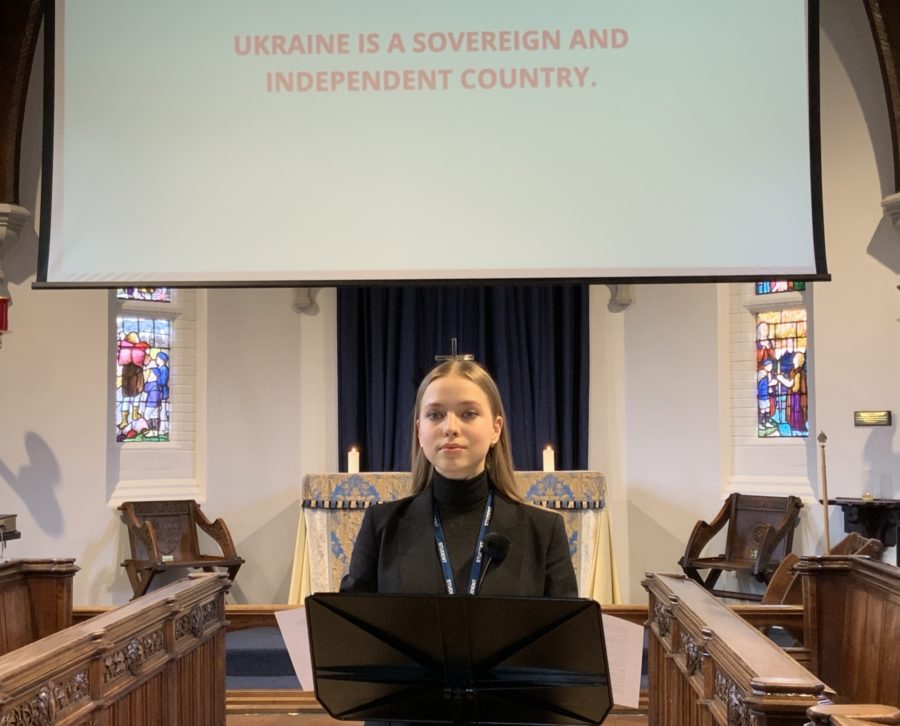 I wish I never had to say these words but at five o'clock in the morning on the 24 of February, Russia launched a full-scale war with Ukraine, with Putin calling it a "military operation." It is not a military operation; it is a real war and now I will tell you why.

….these were the words spoken by Liza, one of our three Ukrainian students, when she led assemblies for pupils in Year 7 and above. She went on to say:

"At five o'clock in the morning on the 24 of February, my parents were sleeping. They would have gone to work that day; my younger brother would have gone to school and at the end of the day they would have all had dinner together. But the President of the Russian Federation, Vladimir Putin, had other plans. He decided to send his troops to invade Ukraine. So, that morning my parents woke up, not because of the sound of an alarm clock, but from a siren that sounded throughout whole of Kyiv. The war had started, and no one knew what to do."

Chigwell School is a diverse community with the families of pupils, day and boarding, linked to countries across the globe. We can all watch the horrific images of the war in Ukraine on the news but when pupils are worried that their homes will be destroyed, or their parents or relatives will be seriously hurt or worse, or their father might be killed fighting to defend his city, then the war feels much closer.

A natural reaction is to ask, what can we do to help? Through those assemblies we hope that pupils now have a greater understanding about what is happening and how Ukrainians and those with family members in the country are feeling. The School also prayed for Ukraine and our Chapel is open to allow those who wish to light a candle to remember those who are suffering. In a more public gesture of support pupils, and staff, were invited to embellish their school uniform with yellow and blue in return for a donation to the Red Cross Appeal for Ukraine. A collection of gifts to help refugees will follow and, to end with the final words of Liza’s talk: We, Ukrainians, are grateful to everyone who has been showing their support, who has been offering any help. It has been a very hard time for us, but I know we will get through it.

I will go back to Ukraine, I will sleep in my own bed and I will meet my friends in the cafes, because we are strong and together we are a huge power. Слава Україні!

Liza's assembly to the Senior School