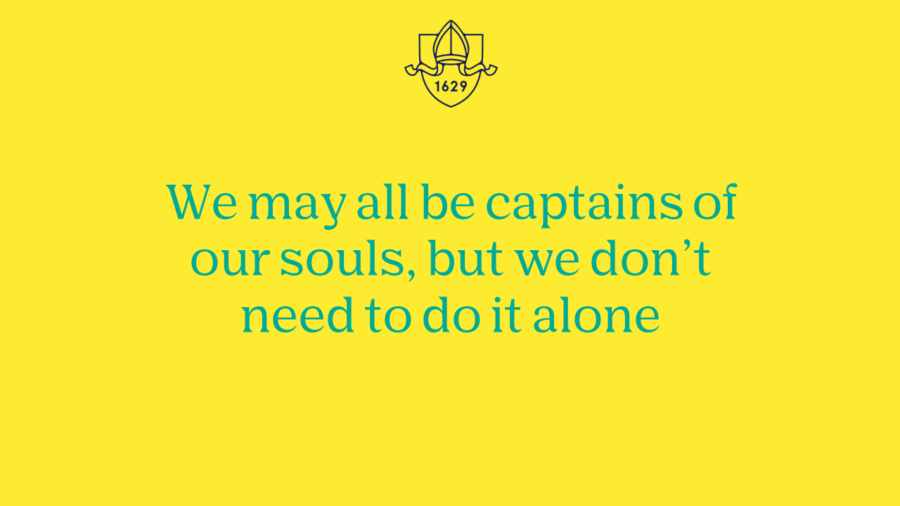 For the first time in 38 years, Scotland beat the England rugby side at Twickenham on Saturday afternoon. Scotland were the better side and deserved to be winners but, without making excuses, I wonder whether there was another important factor at work too… and that was that England, and indeed Scotland, were playing in an empty stadium…. no home crowd to cheer England on… virtual silence rather than the famous Twickenham roar.

As I have mentioned before, one of my heroes is Nelson Mandela who, as you will know, campaigned for the end of apartheid in South Africa and as President, set out to build a united country with far greater equality. However, in between, he served 27 years as a prisoner on Robben Island, just a few miles off the coast of Cape Town. In 2015, we were lucky enough to visit Cape Town which, although it still does have areas of great poverty, is a beautiful city at the foot of Table Mountain overlooking the sea at the very tip of southern Africa. Robben Island, where Mandela spent all those years, is a bleak barren place which has been used as a prison for 400 years in stark contrast to Cape Town, just 40 minutes away by boat.

Mandela’s 27 years in prison were dominated by tremendous hardship. There were freezing winter nights, suffocating summer days, poor food and back-breaking labour. He slept on a thin mat on a stone floor in his tiny cell for most of his time behind bars. For many years, his wife was allowed to visit only rarely and his children not at all. Many of us would have been broken by the experience or would have been left feeling very bitter towards those who had taken such a large proportion of our lives away.

I gather that some of the Upper Fifth have been studying a poem by William Ernest Henley, which dates back to 1875. From the age of 12, Henley suffered from tuberculosis of the bone that resulted in the amputation of his left leg below the knee and it is said that he was the inspiration for Robert Louis Stevenson's character Long John Silver. However, Henley’s poem, Invictus, drawing on his own experience of illness and challenge, reminds us of the potential of the human spirit and its ability to overcome adversity. Nelson Mandela famously recited the poem to himself whilst he was in prison and found that it gave him strength:

Out of the night that covers me,

Black as the pit from pole to pole,

I thank whatever gods may be

For my unconquerable soul.

In the fell clutch of circumstance

I have not winced nor cried aloud.

Under the bludgeonings of chance

My head is bloody, but unbowed.

Beyond this place of wrath and tears

Looms but the Horror of the shade,

And yet the menace of the years

Finds and shall find me unafraid.

It matters not how strait the gate,

How charged with punishments the scroll,

I am the master of my fate,

I am the captain of my soul.

We are indeed captains of our soul; we are to a large extent responsible for what we achieve and we do need to take responsibility for ourselves, rather than blame others or circumstances. However, at the moment, one of the biggest challenges we face is the relative isolation and restriction in who we can mix with. Perhaps we are getting used to the current arrangements and have settled effectively into a routine but perhaps, like England at Twickenham on Saturday, we find the lack of a crowd around us, and not having the normal hurly burly of school life, all a bit a strange and…lonely.

When we visited Robben Island we were told that sometimes if the wind was in the right direction the prisoners could hear the happy chatter of the people on pleasure boats in the bay and it reminded them that the normal free life was going on in the world beyond, while they were confined to the prison – others were happily with friends and family and it reinforced their isolation and loneliness.

Many of you are coping brilliantly with this period of lockdown, although I suspect that everyone is looking forward to it coming to an end and coming back to school. If you are struggling, if you are finding it hard to stay motivated, if you are lonely or just need someone to talk to, then please do speak up to your tutor or housemaster or mistress and they will do their best to help. Sometimes, just talking things through can make all the difference so if this applies to you, give it a try…there’s nothing to lose.

Likewise, think about all those friends you would normally chat to during a school day: in the houses, in the Sixth Form Centre at break or lunch or between lessons. If there is someone you haven’t spoken to for a while, get in touch with them; send them a message or, better still, speak to them. Whilst it’s not the same as being in the physical presence of others, it’s the next best thing and undoubtedly, they will appreciate the fact that you have made the effort. We may all be masters/mistresses of our fate and captains of our souls but we don’t need to do it alone, indeed we are usually much better in the company of and with the help of other people.

Well done for everything you continue to do so cheerfully and let’s hope we are all back together in school again soon.