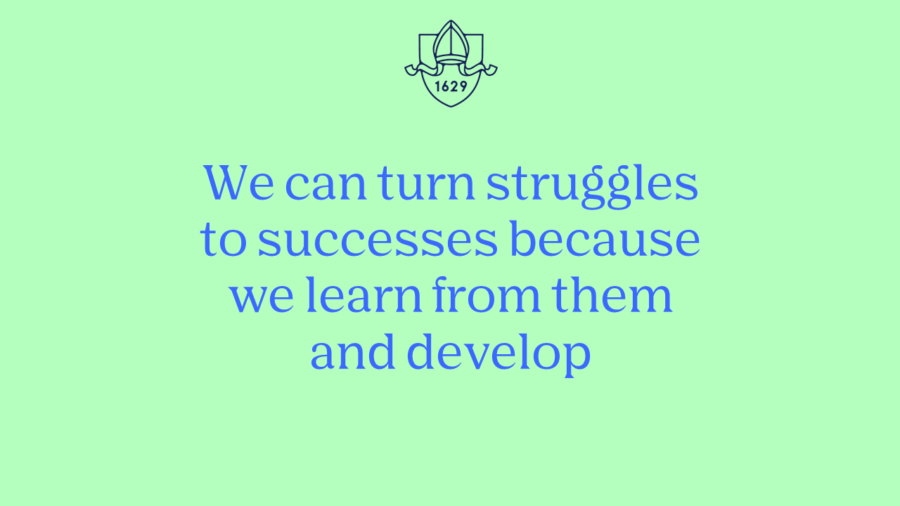 Leafing through the newspaper sports pages, either real or online, over the last few days, you will have come across regular references to David and Goliath in the context of the FA Cup. First up on Sunday afternoon, League 2 side, Crawley Town played the game of their lives against Premier League side Leeds United…62 places ahead of them in the football league. The Crawley David were victorious against the Goliath Leeds, winning 3 - and even an Old Chigwellian was permitted a few minutes of play in stoppage time.

A little later on Sunday, a smaller David did battle with a bigger Goliath in the form of Marine FC playing Tottenham. Marine FC, based in Crosby, is an old club named after an old guest house. The Marine home ground doesn’t quite compare to the new Spurs stadium – it is partly overlooked by houses and when the ball goes over the dividing fence into a garden, a Marine FC ball boy is sent to knock on the relevant front door to ask, “Please can we have our ball back”. Jose Mourinho’s opposite number, the Marine FC manager, works for Mersey Rail and had to take a week’s holiday to prepare his team for the game. His players are only part time professional footballers and include a refuse collector, plumber and NHS track and trace operator, and they earn a few hundred pounds a month from football. Spurs players are slightly better remunerated… but in a generous gesture, aside from the money Marine received from the game itself on Sunday, thousands more was contributed, much of it from Spurs fans, to make up for the absence of the capacity crowd of 3000 that would have surely packed the Marine Travel Arena stadium for the event.

Most of us enjoy a David and Goliath confrontation, comparable with the Old Testament story. As you may remember, the Israelites, led by Saul, were doing battle with the Philistines twice a day for 40 days. Goliath, the champion of the Philistines, stepped forward from their lines and challenged the Israelites to send out a champion of their own to decide the outcome in single combat, but Saul was understandably afraid of what might happen. However, young David put himself forward to face the giant, and Saul reluctantly accepted, offering David his armour. David, declined and stepped up to face Goliath, armed only with his staff, sling and five stones that he had picked out of a stream.

The two men, David and Goliath, confronted each other, Goliath with his armour and javelin, David with his staff and sling. David fired a stone from his sling and hit Goliath in the centre of his forehead, Goliath fell on his face to the ground, and David cut off his head. The Philistines fled, hotly pursued by the Israelites now victorious over an army which, the previous day, they had thought were undefeatable.

There will be occasions when we have the opportunity to face our own Goliaths. To stand up or speak out for what is right. If we are smaller, less powerful, less confident, then that takes some doing… far easier to fit in with the crowd or simply to say nothing. So, if someone is making a hurtful comment about someone else on social media, do we join in, ignore it or suggest that it’s unkind, wrong and should stop? The third option is, of course the harder choice, but my guess is that it’s what we would hope others would do on our behalf if the comment was being made about us.

Another type of Goliath may be closer to home…indeed I suspect we are often our own Goliath. How many times do we shy away from an opportunity, or a challenge because we think it will be too hard, too different or we might not like it? Far safer perhaps to do what we normally do and not take ourselves out of our comfort zones. And yet, when people reflect on their lives, they often talk about those things they tried, even if they did go wrong or were hard, as opposed to continuing with those things that were easy and familiar. In other words, disadvantages can be advantageous; we can turn struggles to successes because we learn from them and develop.

In his book, “David and Goliath: Underdogs, Misfits, and the Art of Battling Giants," Malcolm Gladwell suggests that many of us misinterpret the bible story because we misunderstand who really did have the upper hand. He suggests that it is because of, and not despite, David's size and unorthodox choice of weapon that he was able to slay the lumbering giant. In other words, Gladwell says, most people underestimate the importance of agility and speed. He gives several examples of how this works in the business world but suggests that most fail to recognize the advantages an underdog has when it takes on a competitor who has strength, size, and wealth. And that's exactly why nimble, young companies, with their new solutions to old problems, often can outperform Goliaths.

David's sling was a devastating and was actually one of the most feared weapons in the ancient world – the stone fired from it was like a bullet coming from a pistol. Secondly, some have suggested that Goliath would have been suffering from a disease that causes you to grow excessively, a side effect of which is to have poor sight. So the big lumbering Goliath, weighed down with heavy armour is facing a quick young boy, firing a fast moving missile at him – which he struggles to see.

So the saying goes, pride come before a fall, and the people and organisations who think they are strongest because of their position or strength, perhaps are most at risk – we have seen that in terms of how some companies have responded through the pandemic. Those which have been able to adapt and respond to current challenges will have a greater chance of survival.

So perhaps all of us need to reflect that if we are in the position of Goliath, if we are apparently aligned with the majority, we do well to listen to opposing views; views which question why things have always happened that way, why we can’t do things differently. Because it could be that we are more vulnerable than we think. Likewise, if we are a David; if we know something or someone could be better, be brave because we might just have the right way to do things that others haven’t thought of yet. We are all much more capable than we believe.

And finally, in case you hadn’t heard it, the result of the game between Marine and Spurs was that Spurs won 5-0…so in a sense, on that occasion, Goliath was victorious… but I suspect the team of Davids had a fantastic time trying and probably now stand considerably taller as a result of their experience.