Be Strong, be Brave, be Patient 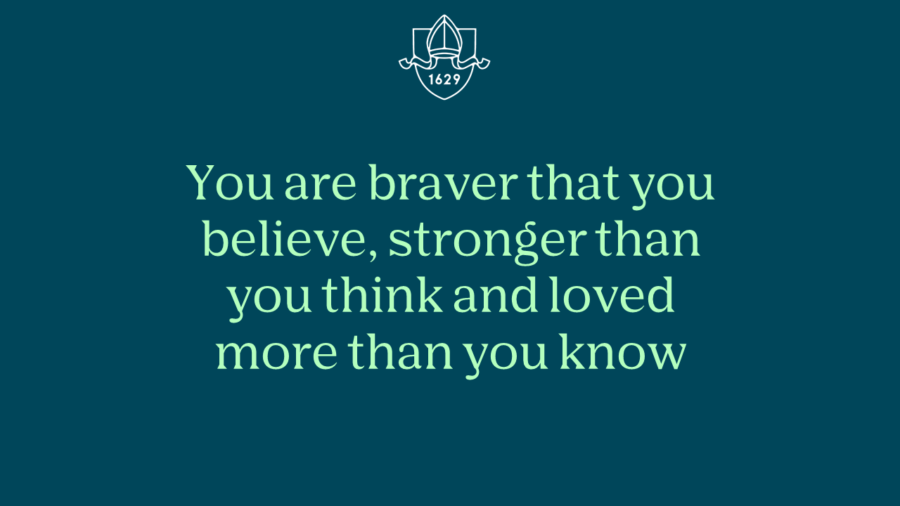 Today I want to talk to you about three things: a tattoo, something that is carved in our kitchen and my brother… and I am going to start with the third of these first.

For me, the last Friday before we broke up was a relatively ordinary day and then, at lunchtime, my sister-in-law, my brother’s wife, phoned me to say that my brother had collapsed whilst taking his car for a service. I was really shocked and surprised to hear this. My brother is a couple of years younger than me, fitter than me and has never had any health problems. He got married just over a year ago and he and his wife have a baby who is just a few months old. However, I did what I thought was most appropriate which was to go and eat lunch in the Dining Hall.

Then, sometime later, when I had finished my Friday fish and chips, my sister in law phoned again, really quite worried. By this time, my brother had been taken to hospital. The doctor had told her that he was in a critical condition and that it was important that we went to the hospital straight away.

I drove round the M25 to the hospital, where the doctor explained that a major artery from my brother’s heart had ruptured and that he needed to have an operation straight away at a London hospital, but there was a chance that he could die. Minutes later, he was put in an ambulance and we drove up to London. We waited for what seemed like ages, but wasn’t, in a corridor, and at 5:30pm my brother was wheeled past to have this major operation. He did manage to speak and he said 6 words to me from his trolley: Look after {his wife}; look after {his baby daughter}… and then he was wheeled away, off to the operating theatre - and at that point I really did wonder if I would ever see him again.

As siblings should be, my brother and I are very close. He was my best man and I was his. He is godfather to our boys and I was godfather to his baby daughter at her christening which took place virtually just five days before this all happened. And the shock of thinking what might happen to him…really was a shock. The doctors spoke to his wife and me, and told us about the operation to repair the ruptured artery…and a valve in his heart…and whatever else they needed to do. They inspired confidence, they were calm, but they stressed that it would be a big operation lasting 5 hours.

We went home and waited and 10 hours later, at 3:30 in the morning my sister in law was phoned to say that the operation had been more complicated than thought - the surgeon said it was a right mess in there (presumably a medical term) - but my brother had got through it. He’d survived.

There was a huge sense of relief and then over the days that followed, we waited for my brother to wake up to see if he was ok. He was in intensive care and because of COVID, no one could visit. We were allowed to phone and a nurse would hold a phone to his ear - we took it in turns and talked about all sorts of things, but it is very hard to talk at someone when there is no flicker of response at all but we hoped that perhaps this might be of some comfort to him…and just might help.

On Christmas Eve, there had been some erratic movement and occasional opening of the eyes and then we were told that there had been a problem and my brother had to have more surgery and at that stage I think we all feared the very worst

But then, a day or two later, my brother opened his eyes… then there was a little movement. We spoke to him on Facetime and the first time I saw him, a whole variety of tubes plugged into his body which was fighting to draw oxygen from the ventilator, I don’t mind admitting that I was very shocked and upset. But the improvement has continued and, although four weeks later he is still in intensive care, we think he is going to be OK. He can’t speak, yet, because his breathing tube is below his vocal chords, but he is starting to be able to communicate with us. We hope that my brother might come out of intensive care in the next week or two and eventually go home and start living life as normal again.

I should say at this point that I am beyond amazed at the quality of care he has had in intensive care - skilful attentive care by kind professionals who together have saved my brother’s life with all that means for his family. It could so easily have been different, and I know that tragically there are families, Chigwell families, who haven’t been so lucky. We have also been so touched by the number of people who, knowing what has happened, have shown genuine concern and real kindness for my brother and indeed his family – there are some really good, thoughtful people in our community.

So my relatively normal day in December is one we will always remember. Some of us like things to be ordered and predictable, while others crave excitement and newness… but at the moment, I suspect there are many of us who would like the term to be starting as it normally would… with us all together in school, seeing each other face to face, having lunch together and sitting around in the Houses and so on. But at the moment, sadly, it just can’t be like that, but it will be again soon. We just need to stick with it, work together, support each other and be kind to others in our community.

In those dark and worrying days around Christmas, I heard someone speaking about the Police sergeant, Matt Ratana, who was shot looking for a prisoner in a police station in Croydon. By all accounts he was a thoroughly committed policeman, but the New Zealander was even more committed to his rugby: he was head coach at East Grinstead Rugby Club and you may have seen that just before Christmas he was awarded the BBC Sports Personality Unsung Hero Award for his work supporting young people through rugby. I am certainly not suggesting that you go out and get a tattoo, but the young man speaking about Matt Ratana had done so…and his tattoo was 6 words that Matt Ratana used to say regularly which apparently comes from a Maori saying: Be strong, Be Brave Be Patient. Those six words spoke to me when things looked rather bleak just before Christmas and perhaps they will speak to all of us as we think ahead to the next few weeks of lockdown: be strong, be brave be patient…and things will be back to normal before we know it.

And finally, in our kitchen we have a little carved piece of wood hanging from a hook with a saying that is similar: You are braver that you believe, stronger than you think and loved more than you know. Remember that too. We will get through these uncertain times; we are certainly capable of finding ways through the difficulties and those around us, the friends we have and perhaps the ones we didn’t know we have, want us to be OK.

Have a really good term; work hard; embrace the challenges we have and never be afraid to ask for help when you need it and before we know it, sunnier days will be here once again.