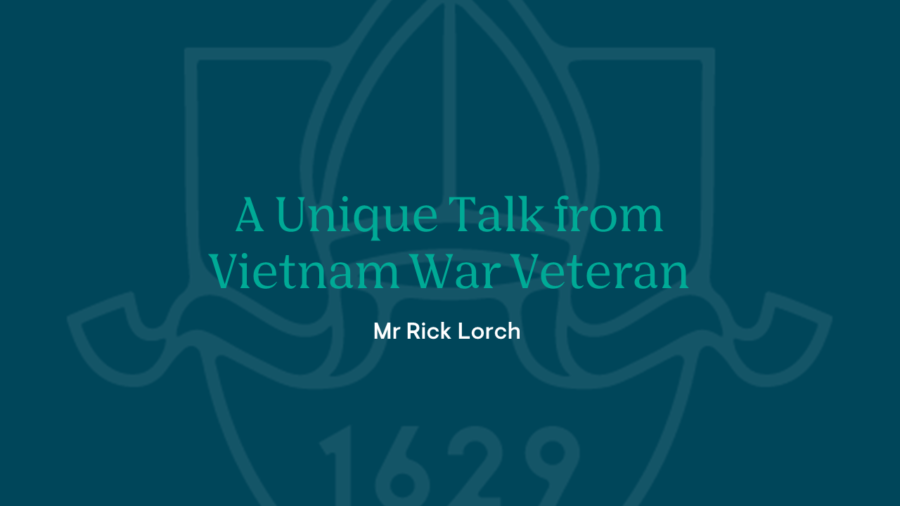 We recently had the unique opportunity to hear from Vietnam War veteran, Mr Rick Lorch (relative of Chigwell Student, Charlotte), who is also a retired intelligence officer for the American government. His personal experience and knowledge about this war was an invaluable insight into the curriculum we cover for history GSCE. Therefore, having a man who was there, who made this history happen, who participated in the Tet Offensive and other various tactical initiatives performed by American troops during the war in Vietnam, was a history lesson 'live'.

Mr Lorch ran us through his personal reasons for joining the army as a young university student, whose parents were discouraging him from drafting. His motivation was a want for an adventure but also a simple sense of patriotic duty to serve his country. He was not prepared for what was happening in Vietnam and quickly realised that American government was not caring for their young men but for their own political gains. He described his preparations before being airlifted to Vietnam, his daily and nocturnal activities and his and his friends fear of ambush. There was his experience of the Tet Offense and the losses of Vietcong which did not bring much political gain for Americans anyway. This was a story of a disillusioned young man, who luckily for him, re-adapted to his civilian life quickly and resumed his life at the University of Kansas to later on becoming a history teacher and intelligence officer.

Though students had prepared questions prior to the meeting, Mr Lorch in fact pre-emptied them in his own presentation. Some students were more interested in mental wellbeing of soldiers in the jungle, drug usage and soldiers attitude towards local civilians. It definitely solidified their knowledge and filled in some gaps , especially with the regards to media coverage of the war, the manipulation of people’s opinions and reasons behind some truly horrendous crimes committed while feeling ambushed and terrified.

Mr Lorch also commented on famous Hollywood films, stating that some managed to realistically portray, for example, the lack of welcome on soldiers return back home - their own personal tragedy for being almost despised for their participation in Vietnam War.

This was a unique opportunity, and we should realise that as with celebrated Holocaust Survivors, Vietnam War veterans are becoming older and scarce. Some of them are also embittered by their war trauma and post-war hostile reception back home.

We are hoping that the link between Mr Lorch and the History Department is firmly established and we will host him during the next school year as well as hoping to use his expertise in American politics for the Williams Project.