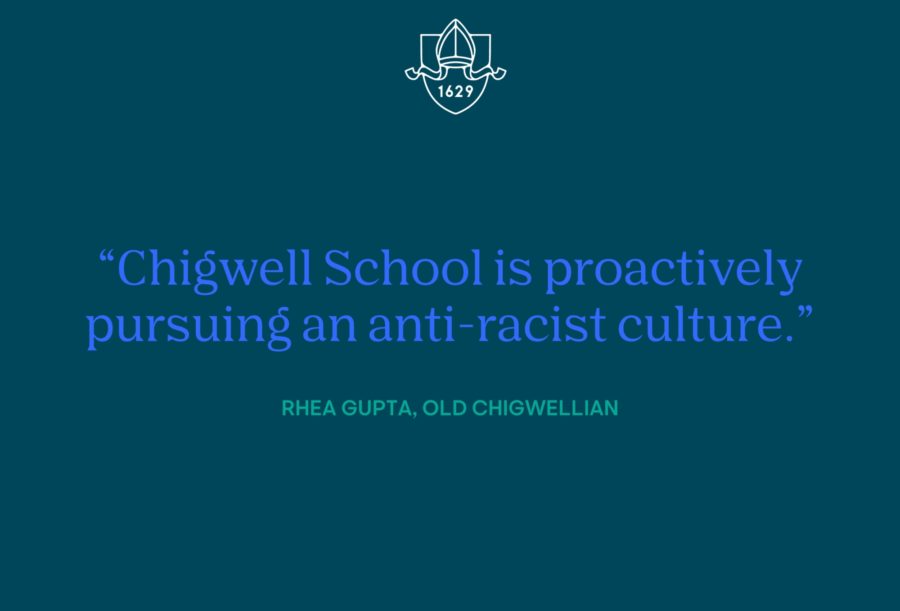 "In June 2020, in the context of increasing awareness on racial inequality following the death of George Floyd, I published an open letter to Chigwell School reflecting on the school’s approach to the issue to date, and encouraging them to build an actively anti-racist culture by making improvements to their curriculum, student support systems and staff diversity. The letter, which was ultimately signed by over 150 students and alumni, prompted the school to reach out and start a conversation, working collaboratively to understand and improve the ways that race is discussed and handled at school.

Working with Flair, an independent consultancy, Chigwell School is actively listening to their student body through a series of surveys and discussions with pupils, staff, parents, and alumni. After taking surveys from 349 students and 69 staff in 2020-2021, Flair provided balanced feedback on the data. Flair reported that while there were several positive takeaways (including a diverse student body, and a strong understanding of racial terms and concepts), there are areas to work on, with most students and staff from ethnic backgrounds feeling less racially included, and specific ethnic groups finding it harder to be themselves, access care and support, or receive recognition. The data also found that, unsurprisingly, malicious acts of racist behaviour are extremely rare, but casual racism happens occasionally.

In my initial discussions with Michael and Jayne, I valued their patience and openness to such complex, difficult and personal issues as one’s experience of race growing up. However, this entirely mirrors Chigwell School’s approach to these issues over the last year, in which they have proactively sought to understand pupils’ and staffs’ experiences, and adopt data-driven policy changes. As well as generating clear focus areas for improving the curriculum and staff diversity, Chigwell is empowering students to change the school’s policies themselves, as the new ‘Equality Ambassadors’ initiative provides pupils with the opportunity to come up with and present their own Code of Conduct. In my view, this will not only make a real impact internally for Chigwell pupils and staff, but is an exemplary approach for other institutions looking to make a change. By reflecting on itself without blame, and putting power into the hands of pupils and staff to shape strategy, Chigwell School is proactively pursuing an anti-racist culture."